The backdoor is installed on this machine:

How can I use it to get the flag in /root directory?

Upon connecting to one of the challenge instances, we are presented with the following data:

Taking a look at pow.py, we are given code to crack the first 4 characters of this data so they equal the resulting hash:

To make connection to this challenge simpler, we can create a python script as follows:

After solving the hash, we are dropped into a shell which appears to be a small container that is re-generated everytime we connect.

At this point, we can pop the provided backdoor executable into a disassembler such as Binary Ninja. The program’s main(int argc, char* argv[]) function contains just one function call to register_backdoor(int argc,char* argv[]): 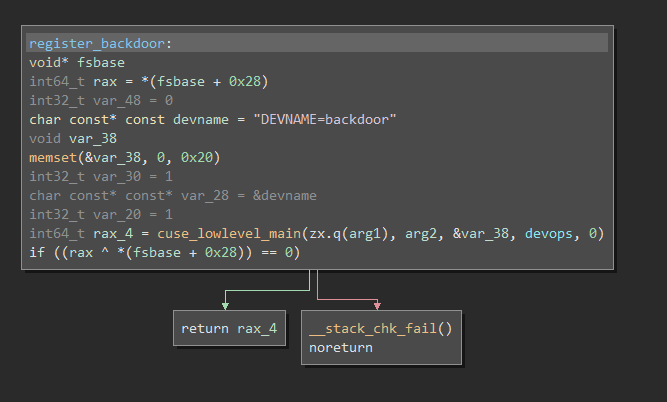 As it turns out, cuse_lowlevel_main() can be used to create a fake device in /dev. The devops variable referenced in the disassembly is used to specify which actions are supported on the device (open, read, write, etc).

backdoor_open() works about how you would think, it just allows services to open() the device.

backdoor_write() is a bit more complicated:

The function starts of taking the input that was just written to the device and parses it by breaking it up into tokens, separated by a ‘:’ character.

The first string before the first ‘:’ must be ‘b4ckd00r’ to trigger the functional part of this code.

It then becomes clear that the next item in the ‘:’ delimited string must be a file name, due to the stat64() call. Looking further down, the function then chmod()’s the file provided with the permissions provided as the third item in the delimited input.

Note: the atoi(third_part) function does not work with octal, which is what the command line chmod tool takes as input. Instead, when forming our request to the backdoor, we must send the decimal form of the octal permissions. For instance, if we wanted a file with 777 permissions, we would use 511 in this case.

Once a shell was obtained, we originally tried writing to the device at /dev/backdoor:

The write error kind of threw us off.

Fast forward to after we got the flag, we realized the write error was from the error that was thrown by the backdoor on bad input. So if we had tested with something like echo "b4ckd00r:/etc/hosts:511" > /dev/backdoor, it would have worked just fine.

But, since we didn’t realize this, here is how we made the process vastly more complicated than it should have been:

First, we made a small C program that would take a file path and decimal permission value to activate the backdoor and chmod a file:

The challenge instance did not have a network connection to the outside world or gcc or any other compiler installed, so we couldn’t simply wget the source or compiled version of the program.

Instead, we opted for the approach of slowly building up a binary file on the challenge instance through the use of lots of echo commands. We tried to use one large echo -n -e '\x7f\x45...' > /tmp/outfile with the entire file in the ..., but either pwntools or the challenge’s buffer wasn’t going to allow that.

Our solution ended up being a function called drop_file(remote_pwn,local_file, dest), which allows us to drop files, with either ASCII or binary data, onto remote challenge instances without an internet connection:

Now, all we had to do was run

and add the following to our python script right before p.interactive():

Once we were dropped into the challenge instance, all we had to do was run chmod +x /tmp/connect and we could change file permissions like so:

While the drop_file() function ended up not being necessary for this specific challenge, we still use it throughout the rest of this writeup. However, this function may be useful in other CTF challenges in the future where tranferring a binary data/executable file is required.

Because the directory we needed to view was /root, we tried changing the permissions on it to be readable for everyone, but that did not work.

After trying a few things here and there, we ended up running the id command:

This output gave us the idea to try and sudo to elevate our privileges, but we were met with the following output:

With our chmod backdoor in place, we finally had a plan.

First, we needed to add our user to the /etc/passwd file. To do this, we decided we would name our new user to ‘sudo’, made /etc/passwd writeable to everyone, added our user, and fixed the permissions on /etc/passwd:

Now, when we run the sudo command by itself, no error is given and we get the usage output.

After executing sudo /bin/sh, we were given a password prompt.

No worries though, since we can change permissions of any file on the filesystem, we just need to add a line in the /etc/sudoers file to allow anyone to execute sudo commands without a password:

After running sudo /bin/sh now, we bypass the password prompt to get a root shell, and as a result, the flag: 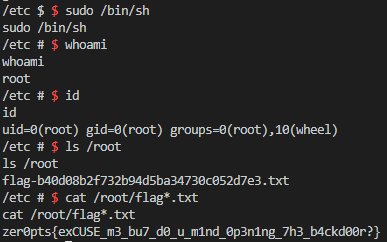